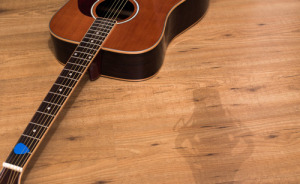 Whether you are a singer-songwriter, a late night mixer or a skilled engineer, the acoustic guitar is likely one of the most important instruments you’ll need to deal with in your studio.

I would argue it’s one of the most complicated to record as well. There are way too many variables involved that it’s super easy to get fooled by something at a certain point.

That’s why in this 2-part series we’re going to get our hands on the real and proven process to get great acoustic guitar recordings. No matter if you have access to a nice big room or you only own a garage; these steps apply everywhere. Follow them and you’ll be a leg up on other engineers!

The room has a dramatic effect when recording acoustic sources. It will always influence the sound of you acoustic guitar, even if the microphone is just a couple of inches away from it.  That’s why you need to start with a good source (meaning a good space). If your guitar doesn’t sound the way you want in your room, then no microphone or mixing hack is really going to help you. Period.

So do what you can to reduce unwanted reflections or echoes caused by hard surfaces. You won’t necessarily need acoustic treatments; you can even get decent results by placing blankets and pillows around to tame those reflections a bit and make your ambient a bit more dead-sounding.

At the same time, make sure there are no noises that might compromise your recording. Sometimes we forgot about that crackling chair, that headphones cable hitting the top of the guitar and things like that… There’s nothing worse than being forced to trash a top notch recording just because of that buzzy crack from the chair coming out after the last chord!

It happened I was so excited about recording that I completely forgot about this huge step.
Before even thinking about which microphone to use, just listen to the guitar. Take your time and make some mental notes on the way it sounds. If there’s something you like (or don’t like) in what you hear, you can think about a specific microphone technique to counteract some of the tones you want to highlight (or reduce).

Just remember there’s no way you can know if you’re capturing the real thing if you don’t really know how it sounds like to start with. Make the first step and just listen to that guitar! Try listening in different spots within the same room, try different rooms in your house with different guitars if you have the chance and then compare what you’re hearing. Conversely on what you may expect, I discovered my living room give me better results than my studio for recording acoustic instruments. Perhaps the same will happen for you!

If you’re the performer you’ll be a bit more limited, but it will work anyhow. Maybe you can ask a friend to play some chords for you!

Small things like these are game changers. The difference in sound you’ll get with different picks will be much bigger than the one you’ll get by swapping the built-in pres in your soundcard for a $2000 external preamp.

Don’t miss Part 2 of this series, coming up later this week!

If you think recording and mixing is all about plugins and gear, then sorry, this post is not for you. But, if you want to...