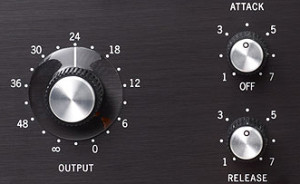 How many times have you found yourself asking things like “this snare needs more character and weight” or “it’s not punchy enough…”?

Maybe someone told you those are things you can get with compression, right? So you started tweaking your plugin and, after a while, discovered you were nowhere close to the sound you had in mind…

It’s ok. It happened to me as well, many times actually… We already discussed the basics of compression, so today I want to focus on these 2 specific things only.

Understanding this is essential to get a fuller grasp on how a compressor really works and, on top of that, you’ll most likely need these concepts on almost every mix! So fire up a session with some tracks and follow me.

Get The Phat Sounding Snare

Ok, you want to give your snare some weight and balls, right? To accomplish that, the goal is to get the sustain sound, the tail of your snare, to connect and become louder relative to the first percussive hit. This means we need to push the attack down, while maintaining the sound and the integrity of the sustain.

The attack sound (the transient) is very fast. It’s the sound of the stick hitting against the head of the drum, that first physical impact that’s been picked up by the microphone. It only lasts a few milliseconds.

So what we’re gonna do is set the Attack very very fast on the compressor, so that it works immediately when the threshold is reached.

To begin with, pick the fastest setting your compressor gives you. As for the the Release, it has to be set very fast as well, because we wanna get the compressor out of the way of the sustain. Dial in a fast release setting, something around 10ms should be fine.

Sidenote: avoid setting both Attack and Release at their fastest setting! That’s primarily to avoid what’s called intermodulation distortion, which is a series of artifacts generated by the compressor. In simple terms, the compressor gets crazy…

Next we’re going to set the Threshold to where we’re hitting the attack but we’re not doing anything to the sustain. What is going to happen is that we’re gonna hear the decay and the sustain come up in level, which is our initial goal.

Look at your gain reduction meter if you need and make sure to make the compressor work just for the very first part of the signal, the attack. Again, we don’t want the compressor to mess with the sustain!

Lastly, the Ratio. As far as you are affecting the right portion of the signal by properly setting the other knobs, the Ratio value becomes less important. Anyway,  start with a setting between 2:1 and 6:1 and you’ll be in good shape.

Get More Attack And Punch

We can also approach this in reverse and do the opposite. We can separate the attack from the sustain, making the attack feel more pronounced relative to the level of the sustain.

This will give us a punchy and in-your-face sounding snare, with more impact and more smack!

We do this by setting the Threshold lower, so that even the decay and the tail are still above the level at which we set the threshold. This means this time the compressor will work on the decay and sustain as well.

The difference is that we’re going to set the Attack fairly slow. For the time being, set it at its lowest setting on your compressor. As far as for the Release, we’re going to lengthen it a bit as well. Use your ears to spot unwanted steep rises of the signal after the hit and, if that happens, lengthen the release more.

The bottom line is that the attack time is taking so long that the first impact is not going to be “caught” and pulled down by the compressor. It’s only getting to pull the signal down when we get to the sustain of the drum.

This way the first transient will be left untouched, while the rest of the signal will be pulled down, thus making that first physical impact of the snare more apparent and punchier.

Want more character, body, sustain, grit and so on?

But Which Is The Right Decision?

Both simple and complicate question to be answered… It all comes down to the music, the genre and, of course, your own personal taste. It’s a musical thing, it’s about feelings… You have to pick the feeling that you think is good given the piece of music you’re working on.

Which feeling is going to be more important for what you’re trying to do? It that the character, the attitude of the snare? Is it the physical impact? That’s up to you.

Don’t forget you can even get creative and experiment with both shapes within the same song, for instance by making the snare fuller on verses and punchier during choruses, or change its shape on beat 4 and leave it plain on beat 2 giving the listener the illusion the drummer played that beats harder, with more wrist and strength.

You can use automations to add movement and mojo to a plain and boring snare and usually are things like these that set the pros apart from the beginners.

This is where the technical side meets the creative one. Use these technical concepts to create musical effects, experiment on different sources and get creative!

One Response to Using Compression To Shape Your Snare Drum

In the first 2 segments of this series, we started dispelling some popular audio myths. In part 1 we learned you can stay away from 0dBFS, the...